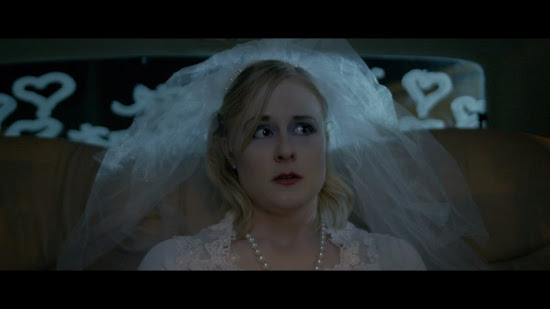 On the final night of shooting the proof of concept trailer for "The Gospel According to Stephenson," Production Manager, Ralph Giordano spoke with Actress & "Stephenson" Blogger Britta Russell about her experiences working on the film...

RG: Tell me about what it was like to be working on a Satire/Horror film? Were you scared...?

BR: The experience was amazing and I'm so thankful to be able to act in this film in addition to being a Production Assistant and Blogger.

Scared...? Actually, yes at one point. Matt Block (Stephenson) gets into his character very well and when he yells at me and Steven (Sabell) in the scene, I literally jumped because it frightened me.  So the reaction was real. It worked great for the scene! 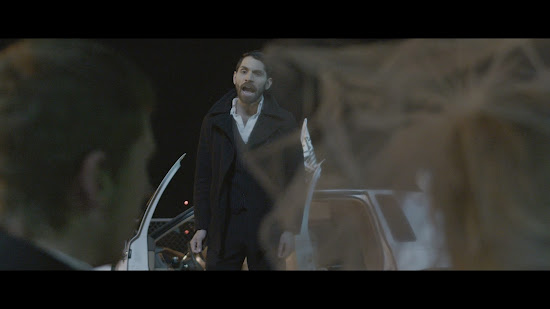 RG: Did you gain any thoughtful insights on how to make the perfect scream?

RG: I know it was fairly cold on the night we shot your scene, and you were wearing a frilly wedding dress, but you endured like a trooper. Is there more cold weather acting in your future?

BR: Being a Minnesota native, I really should be used to it. Everything is a learning experience. The wedding dress used in the scene belonged to my mother and I was fortunate to be able to wear it in the film. However it provided little protection from the elements on such a chilly night. I was very appreciative of the hot chocolate and various crew members throwing a coat over me between takes.  I was well cared for.  Of course I am very willing to work in the cold again, but next time I'll be more prepared! 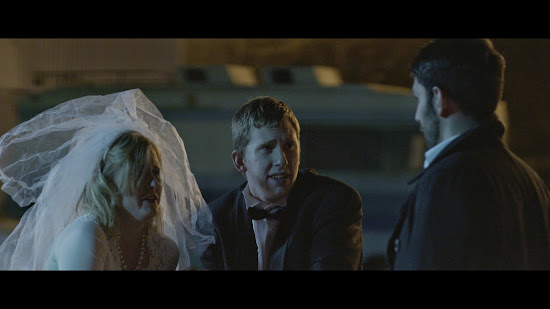 RG: Tell me about your director? What was he like to work with...?

BR: Working with our director, John Schuermann, truly was a dream come true! I met him in LA at the ScreamFest showing of his brother's film The Creep Behind the Camera and was terrified I would blow my chance. Thankfully, he doesn't bite (as Stephenson surely would!) and is such a great guy. During rehearsal for this scene, he asked me if I was okay because I looked terrified. Well, of course I was “acting” terrified, right? He came over and gave me a hug. That was very sweet.

I am greatly honored to be working with such a talented, and ingenious director like John!  He knows what he wants. He molds and perfects what each of us does to get the scene right. His vision is clear, and it was easy to understand what he wanted.

RG: What about your co-stars Matt Block (Stephenson) and Steven Sabell (DuWayne)? Tell me about them. Any behind the scenes stories?

BR: I already knew and was friends with Steven, so it was easy to work with him. It was like hanging out with a buddy. We were very comfortable with each other, which helped a lot since we were portraying newlyweds.

Earlier in the evening, I stepped into the rehearsal room where Matt and John were all huddled around a laptop looking at the storyboard for each scene and thinking, "Oh my gosh, there's lead... our Star!” I was a bit intimidated at first.  But, during filming, I found it easy to work with Matt.  He was a sweetheart and I was able to relax and act natural on set with him. 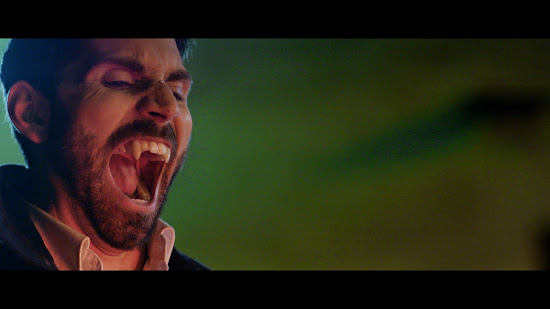 RG: Over all how would you rate your horror film experience?

BR: This experience as an actress was new to me, but I easy warmed up to it... mainly because my co-stars were so professional and fun to work with. This was a wonderful and an incredible experience all around!

RG: Are you ready for more work on The Gospel According to Stephenson?

BR: Yes, I am definitely ready to work more on the Stephenson film! It was truly an honor and I can't wait to get started again!  And, I hope to work with my co-stars again. What a blast!
Posted by John Schuermann at 11:07 AM